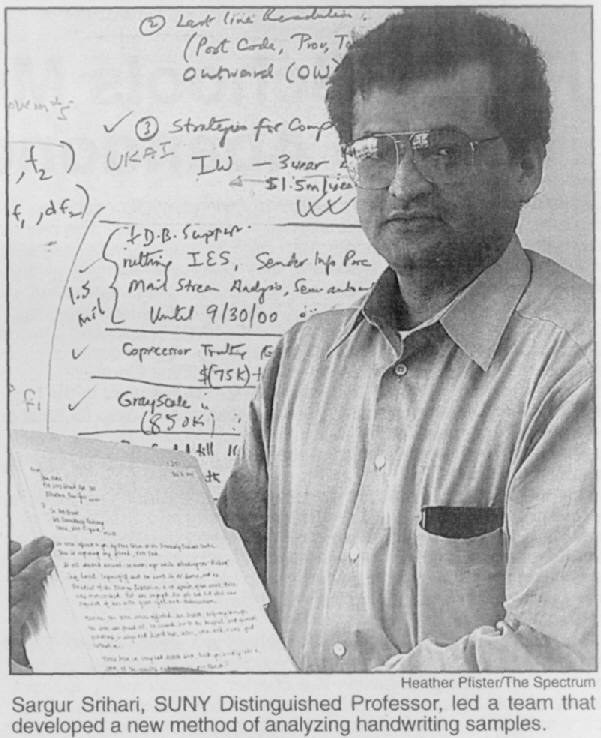 Handwriting analysis may soon serve a purpose similar to DNA and fingerprint evidence in court, and a software program developed at UB may pave the way for a scientific method of identification in what used to be a process tainted by human error.

Two years ago, UB's Center for Document Analysis and Recognition (CEDAR) received a $428,000 grant from the National Institute of Justice that aided the development of computer-assisted handwriting analysis tools. Sargur Srihari, principal investigator and SUNY Distinguished Professor in the Department of Computer Science and Engineering, spearheaded the effort.

"The object of the software is to validate the individuality of handwriting," he said.

"The whole motivation of the project is the U.S. courts," said Srihari.

Reliance upon handwriting experts, known as graphologists, will diminish after the introduction of the software developed by Srihari and his research team, providing a greater degree of objectivity.

"A human expert may put in his or her own bias even unconsciously," said Srihari.

The process of developing the new identification software involved collecting more than 1,000 handwriting samples from people nationwide. The demographic breakdown for the samples was based on U.S. Census Bureau reports, assuring that factors such as race and gender weren't weighted and extended to include accurate numbers of right- and left-handed people.

"We didn't want it to be skewed to any particular group," said Srihari.

Each subject was asked to submit multiple samples, which were broken down to measure the shapes of letters and the spaces between them, among other criterion. A human expert would simply look at the samples to compare them.

Srihari explained that there is a particular and unique manner in which the software can characterize an individual's distinct handwriting.

The data collected from the samples was integrated into the developing software, and Srihari and other UB researchers were able to create a program that analyzes writing to determine characteristics such as letter shape and curve.

In this manner, signed documents can be authenticated and authorship of ransom notes and forged checks could be determined.

As impetus for the project, Srihari said he received notification that the National Institute of Justice was offering grant money to university researchers interested in tackling the project of software development.

CEDAR, which developed Handwritten Address Interpretation (HWAI) in 1997 for the U.S. Postal Service, was poised to undertake the endeavor. It's computing capabilities and status as the world's largest university-based research center dedicated to developing technologies to read handwriting made it a prime location.

The handwriting samples taken for the National Institute of Justice study are still being used to develop further software. Srihari said he hopes CEDAR's capabilities will recognize "arcades and garlands," highly distinct features of handwriting, within the next year.